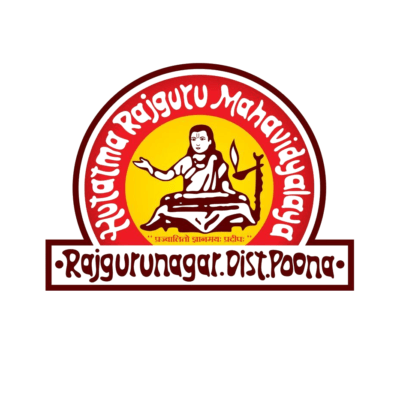 Hutatma Rajguru Mahavidyalaya was established in 1977. Initially it was run in Mahatma Gandhi Vidyalaya, Rajgurunagar. Shri. C.K.Lunawat, Shri. Trymbakrao Joshi and Shri. Dadasaheb Pathak extended their co-operation. There were only Science and Commerce faculties. Despite several difficulties, the Science faculty was started to promote science education. The founder members wanted the students to avail themselves of job opportunities in the related fields. At the initial stage the strength was 205. It increased gradually. Now it has reached to 3881. The faculty of Arts was also started in 1984. At present, there are three full-fledged faculties with post-graduate departments of Marathi, English, Economics, Political Science, Commerce, and Organic Chemistry. Along with this, we have also started B.C.A., B.Sc. Computer Science at degree level. The number of girl students has been increasing every year. Keeping pace with the changing times, the institution has introduced Functional English and Computer Application as vocational courses.

The college has an independent library building: Sarnyayadhish Yashwantrao Chandrachud Granthalaya. Hon’ble Shri Yashwantrao Chandrachud is the son of the soil. He was the chief justice of the Supreme Court of India. It suggests that the institution cherishes the ideal of scholarship. The Hutatma Smarak handed over by the Govt. of Maharashtra is used as the reading hall for the students.

The college also highlights the importance of sports in life. Well-furnished gyms and other sports facilities encourage the students to participate in sports activities. The sports complex developed by the college is called Shahid Bhagat Singh stadium.

In order to get out of the book bound education confined to the four walls of the classroom the institution thinks it proper to spread education far and wide. A centre of Yashwantrao Chavan Maharashtra Open University (YCMOU), Nashik was opened in January 1995.

The centers of extra-mural activities, N.C.C., N.S.S, Earn and Learn Scheme, contribute to enrichment of personality and teach the students the importance of discipline, social awareness and commitment, dignity of labor and other values.

The college has contributed to the educational development of this taluka. The promising careers of the young students prompt us to perform better. The challenges of the future time are always kept in mind and efforts are being made to meet these challenges. A new building for science laboratories was inaugurated by Honorable Shri Chhagan Bhujbal in the presence of Shri Sharad Pawar. On this occasion, Shri Sharad Pawar unveiled the statue of late Shri Sahebraoji Buttepatil. We have built a girls’ hostel.

We organize elocution competition to commemorate the sacrifice of Hutatma Rajguru on his birth anniversary. Since 2002, we have been organizing Late Sahebraoji Buttepatil Memorial Lecture Series from 26th January to 1st February every year. We invite dignitaries who are known for their talent and social contribution.