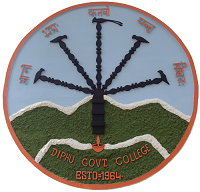 Diphu Government College is the only NAAC accredited higher educational institution in Karbi Anglong District of Assam. It was due to the pioneering efforts and visions of Lt. Chatra Sing Teron, Lt. Sai Sai Terang, Lt. Jogendra Nath Goswami, Lt. Dhoniram Rongpi, Lt. Joysing Doloi, Lt. Sar Rongpi and Lt. Padma Kanta Barua, that the college came to be formally inaugurated on 23rd June,1964. The College being a venture Arts College and beginning with only seven students and five teachers was taken over by the Government of Assam in the year 1967. A lot of combined creative efforts had been put together by its noble founders along with the founder Principal P.K. Bhuyan and the student leaders in converting the college into a Government College. The Science and Commerce streams were introduced in the college in the years 1979 and 1987 respectively. The College campus is located on a hillock of the District head quarter, Diphu. It has 15 Departments, around 5000 Students (Session 2014-15), a post of Principal, a post of Vice Principal (appointed by Karbi Anglong Autonomous Council: KAAC), 92 Teachers, 5 Library staff and 54 Non-teaching staff at present. The college realizes with Dr. R. Kothari that ?in the rapidly changing world of today, one thing is certain- yesterday’s educational system will not meet today’s and even less so, the need of tomorrow.? The college is aware of the need and urgency of equipping the learners with tools required for making them compatible to the context of the ever changing global scenario.

Gradual introduction of Degree programs in Arts, Science and Commerce streams driving the college closer to the cherished goal of imparting higher education facilities in this District. Considering the parameters of employment opportunity, value addition, skill formation and global relevance, the college has been putting relentless efforts in diversifying its courses/ programs. The College has also been offering different courses on Computer Education for the last thirteen years. Introduction of various courses and programs in recent years proves the dynamic character of this college. The college has an RCC two-storied building housing all the Arts and Commerce departments. There is an extended AT building which is now housing the Department of Geography, NCC office and the Cultural museum (Department of History). A separate Science Building with multi-storey provision is accommodating the Physics and Chemistry departments in the ground floor and the departments of Botany and Zoology in the first floor. Further, there is a two storied building which is accommodating IGNOU Study Centre and College Guest Rooms on the 1st floor. On the ground floor there is the College Canteen, Post Office (PIN: 782462), DGCSUS (Diphu Government College Students’ Union Society) Office and a Health Centre. The College has at present 1 (one) Principal’s Residence, 4 (four) hostels: 2 (two) for girls and 1(one) for boys, 3 (three) Wardens’ Residence for hostels, 23 (twenty three) Teachers’ Residence and PROFILE DIPHU GOVERNMENT COLLEGE D 3 6 (six) Non-teaching Staff residence. Out of the four Hostels, one new Boys Hostel will be opened after it is fully furnished. The College has a Play ground, a Basket Ball court, and various indoor game facilities, a spacious Auditorium with light and sound facilities, an air conditioned Conference Hall with roof mounted LCD Projector facilities.

The campus is beautified by a College Garden, a Peace Park and a Solar Energy Park. Moreover, the college has a Central Library with a stock of over 51,000 Books. Journals, Newspapers and Magazines are also available to the College community. The college has an Internet Cafe at the UGC Network Resource Centre. The college provides ample opportunities to promote general, transferable skill among the students through co-curricular activities like outreach program organized by NSS wing, NCC, Debating and Extempore Speech Competitions, Wall Magazine, College Magazine, Science Journal, Arts Journal and Commerce Journal, the Annual College Week Festival, Seminars, Literary Competitions etc. A number of forums such as the Arts Society, Science Society, Commerce Society, Sahitya Chora, Planning Forum, Education Forum, History Forum, Political Science Forum, Population Education Club, Career Guidance Cell, etc. are there. The college has instituted an innovative ?Teacher-Guide Program? to guide the students in academic and other information needs. The college is affiliated to Assam University (Central University), Silchar. The medium of instruction in the college is English. The college has already successfully completed its glorious 50 years from its inception.