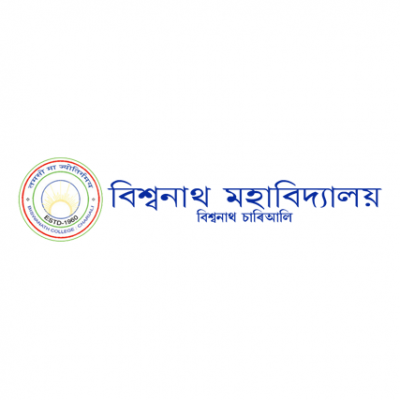 Named apparently after Biswanath temple, one of the famous as well as oldest temples in the north-eastern part of India, Biswanath College has a heritage that goes back to more than 55 years, and it occupies a place among the premier seats of higher learning on the north bank of the river Brahmaputra. Bounded by the river Borgang in the east, river Ghiladhari in the west, the Himalayas in the north and the river Brahmaputra in the south, Biswanath is one of the most important places in Assam in general, and in the district of Sonitpur in particular if taken into account its historical significance. Having contributed significantly to the academic and cultural life of the north bank of the river Brahmaputra, Biswanath College has carved a niche for itself in the sphere of higher education in Assam. The college came into existence on 7th September, 1960 through the untiring efforts of the magnanimous people of the place in general, and of Naazibur Rahman, the then executive engineer in the PWD department, Assam, in particular.

At present Biswanath Chariali (in the past the name of the place was just Biswanath) is one of the fast-growing cities in Assam, and there is every possibility of its becoming a district head quarter in future. Liturgical and archaeological aspects apart, Biswanath Chariali has a long and varied history in its growth and development as a town of today in terms of its educational institutions that could flourish owing principally to the natural surroundings engulfing the locality. It is the mighty river Brahmaputra that once provided Biswanath to figure out as one of the most prominent places in Assam in terms of trade and commerce, which gradually turned the locality into a platform of education and learning despite its rural background.

Subsequent to the end of the 600 years old Ahom Rule as an after-effect of the historical Yandaboo Treaty in 1826, the British rulers preferred Biswanath in their attempt to establish the administrative centre of the North Bank of Assam at Biswanath Town, 5 kilometres away from present Biswanath Chariali centre. The naval communications of both cargo-vessels and passenger-steamers through Biswanathghat enabled the then British traders to execute their commercial schemes in and around the locality. Tea gardens grew up. The contract labourers from other states of the country, mainly Jharkhand and Orissa, originally called girmitiyas, were brought in 4 large scale to run tea industry, which in the long run caused a remarkable change of the demographic pattern in the cosmopolitan direction. The communication system around the place comprising as many as twenty tea estates including the largest one in Asia (Monabari Tea Estate) got considerably improved. And the business activities flourished in geometrical progression. With the exponential growth of business enterprises, there grew all-round development of the people in the direction of learning and culture-giving vent to the steady growth of educational institutions, like Chariali H. S. and M.P. School, Biswanath College, Chariali Girls H.S. Scool, Chariali Academy, Adarsha Vidyapeeth, Little Star School (English medium), Satsanga High Scool (Bengoli medium), Lakshmidhar Memorial School, Hindi High School, Bapuji High School, Modern High School (English medium), Sankardev Sishu Niketan, Jatiya Vidalaya, Jawahar Novadaya School, St, Xavier’s School, District Institute of Educational Training, Biswanath Commerce College, Biswanath College of Education, Biswanath College of Agriculture, and Farm Machinery Testing and Training Institute.

The College tries its level best to provide necessary assistance to students for facilitating their holistic progression. The admission process is quite transparent. It is printed in the college prospectus and uploaded on college website. The college prospectus also contains statement of vision goals and mission. The College makes efforts to facilitate progression of the students towards gainful employment. For this purpose, different Skill Development programmes are conducted in the campus. Welfare measures taken by the college are in the form of scholarship, fee concession, book bank facilities, moral and infrastructural support to differently abled students. There is a Grievance Redressal Cell which is vested with the authority to redress any type of grievances raised by the students. With the help of the student’s union body the College encourages students to participate in various cultural, literary and sports competitions organized during Annual College Week and Freshmen’s Social. Many of our students have been conferred with medals and trophies in the events/competitions held at inter-college youth festival organized by Gauhati University. The College also publishes its annual magazine “Biswanath College Alochoni” to encourage creativity among students. The girls of the Women’s Hostel of the college also publish a magazine “Kandari” annually. The Career Counselling Cell of the College is very active. Women Cell of the college helps the girl students in every possible way. Student’s Union is constituted in the institution by the way of direct voting.

Thus, Our College has been relentlessly trying to realize its vision, goals and mission through strategic action plans, future development plans, effective leadership and participative decision making processes and the college will strive for the upliftment of greater Assam with never ending enthusiastic spirits.