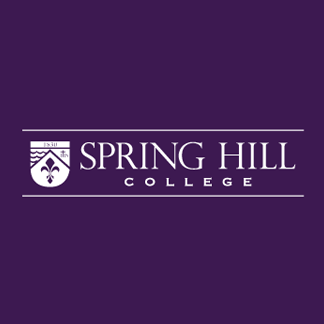 Bishop Portier originally purchased 300 acres of land to establish a seminary and boarding school. The site sat on a hill six miles west of Mobile and afforded panoramic views of the city and its harbor. Portier recruited two priests and four seminarians from France to staff the school. He originally intended the boarding school to provide students under the age of 12 with an education in classical and modern languages, mathematics, geography, astronomy, history, belles lettres, physics and chemistry. Portier soon relaxed the age restriction, and the boarding population increased from roughly 30 students the first year to almost 130 by 1832. Initially, the bishop himself taught Greek at the school and, due to the lack of priests, pressed seminarians into service as teaching assistants or monitors. Difficulties staffing the school persisted until 1847, when Portier recruited French Jesuits from Lyon to take over.

Like other Jesuit colleges, Spring Hill followed a European model in which students began attending at age 9 and studied subjects at both the secondary and collegiate levels. The sons of Mobile’s established families – Catholic or otherwise – attended Spring Hill High School and the college. The high school persisted until its closing in 1935.

In 1932, the college launched an extension program with Saturday classes aimed at adults. For the first time women were admitted as full-time students to the program. Successive presidents of Spring Hill, Patrick Donnelly, S.J., and Andrew Smith, S.J., brought landmark changes to the college after World War II. Both men viewed racial segregation as an ethical and moral dilemma, and in 1954 Smith presided over the enrollment of nine African-American students to the college. For 10 years Spring Hill was the first and only integrated college in the Deep South.