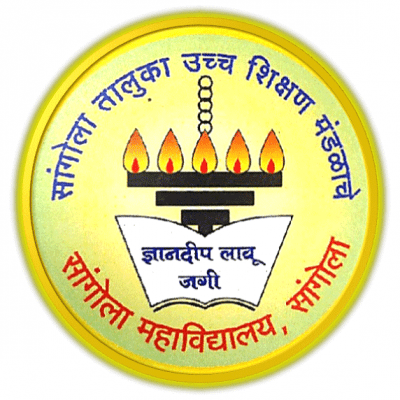 Solapur is one of the drought-prone districts of Maharashtra State. Agriculture is the main source of its income and livelyhood. Out of the eleven talukas of the district, Sangola taluka suffers from high intensity of drought, which has resulted into its economic, political, industrial and educational backwardness. Sangola town is the headquarters of the taluka. With a strong conviction that education, and especially higher education, works as an engine of all round development of any region, local vanguards like Late Dadasaheb Shende, Late Bapusaheb Zapke, Late Bajrangaba Lokhande and others established a society named as Sangola Taluka Uchha Shikshan Mandal, Sangola in 1970 in order to facilitate imparting of higher education. Previously students of this taluka had to go to Pune, Solapur, Sangli and Kolhapur for their higher education, which was a very costly affaire for them. Pioneers of the College brought higher education at doorstep of common man.

The College was started with two figure number of students and at present the number has reached to four figures. Initially only Arts faculty was opened in 1978, followed by Commerce faculty in 1981. Science faculty was introduced in 1991. Considering the need of time new courses like B.C.S, B.C.A. were started in 2000 and 2003 respectively. It is a matter of proud that our College is pioneer in introducing B.C.S. course in Shivaji University, Kolhapur. The College marched one step ahead with post-graduate teaching in Marathi and Hindi in 1995. Considering the need of post-graduate in computer science we started M.Sc(Computer Science) in 2003. The students are drawn from Sangola and peripheral rural area. Hence, the College has to make to pull them up to the common level. Effort of the faculty are rewarding. Some of our students have emerged as rank-holders in the University examinations. As well as number of students are working in software Industries in various multi-national organizations. Up till now twelve students of N.C.C. unit were selected to take part in R. D. parade in New Delhi. Also in sports we get number of awards as well as our some student’s are members of state and national teams in various events.