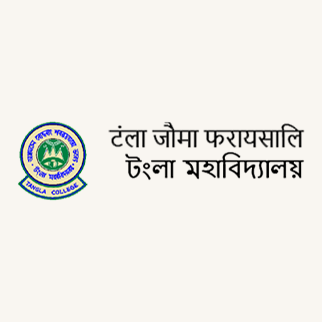 Tangla College (Tangla Mahavidyalay in Assamese) came into existence in the year 1970 as a result of sincere and untiring efforts of some of the leading personalities of the northern part of the undivided Darrang District of Assam. The college is located in a plot of land of 101 bighas 2 kathas 15 lechas reserved by the Government of Assam in the name of Tangla College. Late Hiralal Patowary, the then MLA of Panery Legislative Assembly Constituency, was the first secretary of the sponsoring Body and late J. Duara, the then Sub-Divisional Officer (Civil) of Mangaldai Sub-Division, was the President of the Body. The College was set up with the noble objective of catering the needs of higher education to the socially and economically backward people of the region. Initially, the college started to impart Arts education at Pre-University level. The Degree Courses in Arts was introduced in 1972.

The establishment of Tangla College was a bold step in spreading and promoting higher education and dissemination of knowledge in the North-Western part of the then Darrang District of Assam. Since its inception, Tangla College has been the nerve-centre for intellectual, academic and cultural pursuits in the region.

In the history of Tangla College, the initial stage was quite remarkable. The college Foundation Stone was laid on 17/11/1969 by the then Education Minister Jaybhadra Hagjer and was Inaugurated on 20th July 1970 by Dehiram Boro, the First Graduate of the Greater Tangla Area. It started functioning with an enrolment of only 143 students in the building of Tangla Marketing Society with an arrangement for holding classes in both Day & Night shifts. Later, the College was shifted to its own premises from the 1st March 1971.

Initially, the college could offer facilities for Arts stream only, including a few common subjects for both Commerce and Arts (i.e. Book-keeping, Business Methods, Commercial Geography, Commercial Arithmetic etc.) at the Pre-University level.

The college was taken over by the Government of Assam under Deficit-Grant-in-Aid System in December 1975, i.e. after five years of its establishment, the credit for which goes to the sincere and untiring efforts of Late Ramesh Chandra Saharia, the then MLA of Panery Legislative Assembly Constituency and the then President of the Governing Body of the College.

The College introduced the subjects of Commerce Stream at Pre-University level in the Academic Session of 1972-73. The faculty of Commerce in this College was elevated to the Degree level in the year 1979 and brought under the Deficit Grant-in-Aid System with effect from February 1986.

The college opened a new chapter in its history by introducing the Science Stream in the Higher Secondary level in the year 1987-88. The Science Stream was also the fruit of the efforts of some leading personalities of the area and the initiative taken by the College Governing Body. Now, it is a degree level stream with major courses in some of the important subjects. Science faculty has already obtained permanent affiliation from Gauhati University in 2009 and the Faculty been taken over by the Govt. of Assam in its New Provincialisation Scheme w.e.f. 01-01-2013.

The college has introduced a Job Oriented Integrated Course of Certified Industrial Accountants (CIA) since February, 2015 in collaboration with the Institute of Computer Accountants (ICA) which is a collaboration partner of National Skill Development Corporation (NSDC), with its HQ in Kolkata and a Regional Centre at Panbazar, Guwahati. A short write up, admission form, etc of the Institute are being attached at the end of the brochure.

Moreover, the college has been selected for upgradation to a Model Degree College by the Govt. India under Rashtriya Uchchatar Siksha Abhiyan (RUSA). If all the implementations of the Scheme work well, we can hope for a far better academic environment for its excellence in our college.

Thus, at present, Tangla College is a full fledged Degree College with three steams i.e. Arts, Commerce and Science, with students’ strength of more than three thousands. In all the streams there are inspired and dedicated teachers teaching both Major and GENERAL courses.